Vivienne Westwood will be marching from Battersea to Knightsbridge to the Fracked Future Carnival, come and join her march at Battersea Bridge from around 11:00am to 11:15am, where we march in solidarity.
Fracked Future Carnival on the 19th  of March it is a demonstration towards the CEOs of IGas, Cuadrilla and various government officials who are attending the Shale Gas Forum to plot new ways to bring fracking to the UK. We know fracking won’t lower our bills and it won’t bring significant jobs. It has the potential to ruin our land, our water, our soil and will keep us dependent on fossil fuels. We won’t let them frack our future!

There will be a live DJ set, speakers (including Vivienne) at the event. Please bring food/soft drinks (picnic) as we plan to be there till 4pm the latest 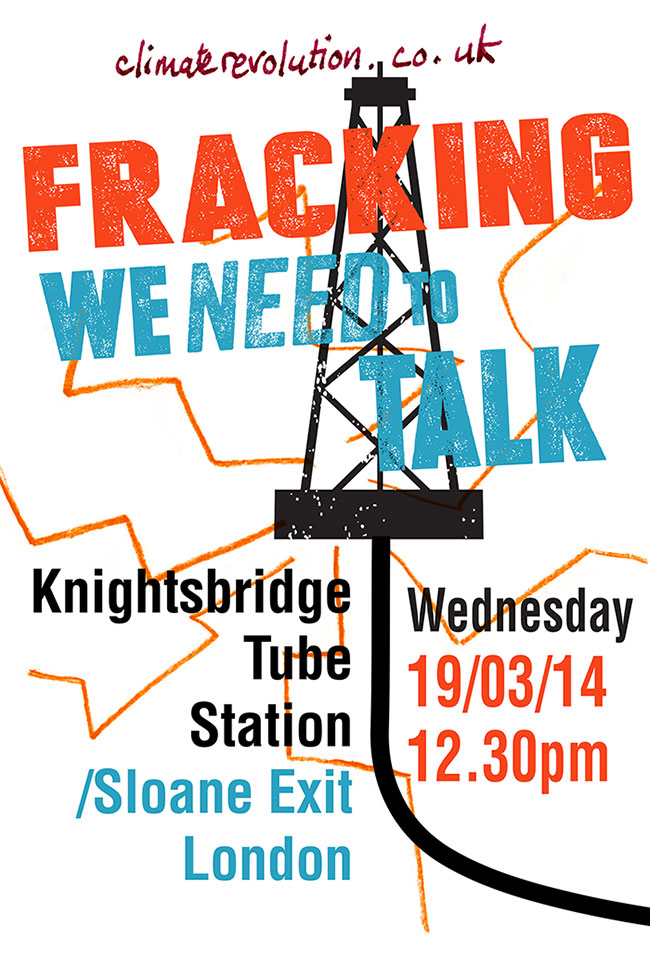 Ben says:
P.S.Apparently upon hearing about our march the participants of tomorrows shale gas forum have now moved their venue to an alternative secret location. The march is still going ahead so please join us. It is great to have these people ‘on the run’ so to speak & I would like to ask what do these people have to hide? Government ministers & energy CEOs sneaking around in secret together does not sound very democratic to me…….

P.P.S.My problem with fracking is on several fronts:

1. Global Warming:  The issue with global warming is that even if we only burn the fossil fuel resources already found &  being extracted now this will increase the CO2 levels way beyond the point at which the IPCC has said that runaway climate change will occur. If the average world temperature warms up another 2 degrees then it will not be possible to stop it then automatically jumping to 5 degrees whereupon life on Earth will be akin to the Permian era 250,000,000 years ago & the area below the latitude of Paris will be uninhabitable desert.
Any attempt to find & exploit further sources of fossil fuels is therefore the wrong way to go. We need to reduce our reliance on this energy source. http://globalwarming.berrens.nl/globalwarming.htm

2. Ecocide: Even if global warming were not an issue then the ‘Ecocide’ being perpetrated on planet Earth, our home is.
Is it not about time that mankind, the dominant species used it’s intelligence to look after its home instead of trashing it? You can’t say that if you cut down every tree on the planet & burn it that that will not have an effect on our environment, the air we breathe & quality of life.
If we poison our water sources how will we grow food & what will we drink? If we destroy the flora & fauna on the planet will that not affect the ecosystem that we humans are a part of? Or do the powers that be think we can all live in sterile technological bubbles.

3. Fossil fuels are limited: At some not too far off point they will run out even if we exploit every source. Is that the point when we use our ‘intelligence’ to solve the problem by developing other sources?
We should do this now. Tax breaks should not be being given to the fossil fuel industries, they should be being given to projects developing & using green energy projects. We need to put everything we have got into these areas & maintain our stocks of oil & gas for uses in the long term future. We hope we will still be around in a 1000 years do we not? …The Great Human Race!

4. Democracy: The government is riding over & lying to us. There has not been a public debate or referendum about Fracking (or anything). All sides of any argument should be put to the people to decide on. The government should not have an opinion that they try to persuade us to take. They are our representatives that do what we decide & they are elected for that purpose only.
The press is in existence to inform us. It should never be censored & biases should be countered by the non-existence of monopolies.
We need to think ‘outside of the box’. Our present ‘Economy’ is put to us as the only right way to proceed, as the ‘God’ of our society.
Actually it only supports the ‘exploiters’ & the richest in our society. The majority of people are having their lives made worse as everything that they need gradually gets taken away from them… & from their children in the future.